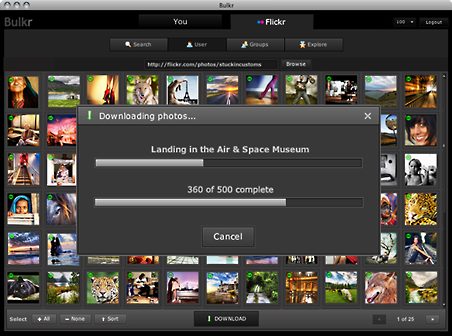 Bulkr development started back in December last year, and after almost 9 months, it is finally out of Beta! Thanks everyone for using Bulkr and making it one of the most popular Flickr download app! I developed Bulkr for my own personal use, and had never imagined that so many people would use it on a regular basis. Here are few numbers, which will give you and idea of how far Bulkr has come:

I’ve spent the past few months gathering feedback from users and improving Bulkr. This is one of the reasons there has not been any blog post for a while 🙂

Today I’m happy to announce that a stable version of Bulkr – v1 has been released. With it Bulkr PRO has also been introduced. You can always install Bulkr for free but some of the features will be “locked”. To unlock all the features, you will need to purchase Bulkr PRO. Following are the features that will be unlocked if you upgrade to Bulkr PRO:

Bulkr has remained a free app for a long time. Of late, it’s development and support has demanded a lot of my time, so I’m hoping having a PRO version will justify the effort. However, I still want people to be able to use Bulkr to do basic stuff – the free version still packs a punch:

Once again, I want to thank everyone for supporting Bulkr and it’s development. All the feedback has been really valuable, and has made Bulkr what it is today.

Install Bulkr FREE and if you would like to support it’s development & unlock all the features, please consider going PRO!